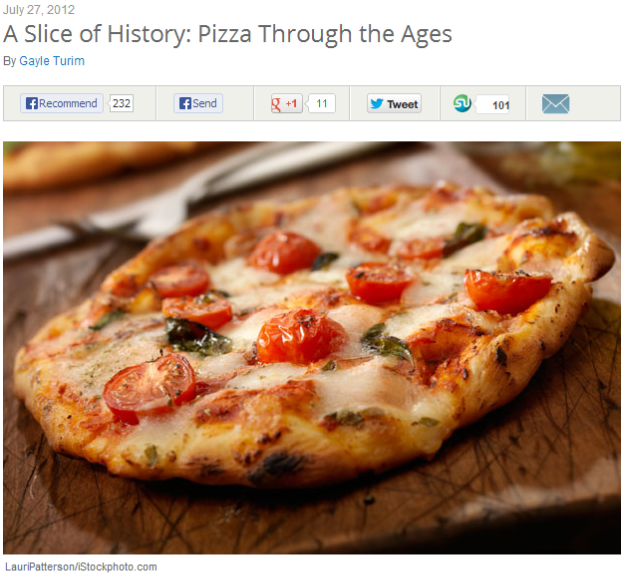 A History.com article explores the history of pizza:

Founded around 600 B.C. as a Greek settlement, Naples in the 1700s and early 1800s was a thriving waterfront city. Technically an independent kingdom, it was notorious for its throngs of working poor, or lazzaroni. “The closer you got to the bay, the more dense their population, and much of their living was done outdoors, sometimes in homes that were little more than a room,” said Carol Helstosky, author of “Pizza: A Global History” and associate professor of history at the University of Denver.

Unlike the wealthy minority, these Neapolitans required inexpensive food that could be consumed quickly. Pizza—flatbreads with various toppings, eaten for any meal and sold by street vendors or informal restaurants—met this need. “Judgmental Italian authors often called their eating habits ‘disgusting,’” Helstosky noted. These early pizzas consumed by Naples’ poor featured the tasty garnishes beloved today, such as tomatoes, cheese, oil, anchovies and garlic.

How much has the pizza evolved from simple Neapolitan food fare to part of a gourmet menu in some of the best Reno restaurants? Like stews, the pizza can have just about anything on top; cheese, tomatoes, basil, meat, fish, veggies, and so on. It found its way into America in the early 1900s, eventually becoming one of the most iconic foods in the country. However, the pizza wouldn’t have been made possible if it weren’t for a simple flavor: the margherita.

It all began after the unification of Italy in 1861 when King Umberto I and Queen Margherita paid a visit to the poor town of Naples in 1889. Of the flatbreads they enjoyed, the Queen enjoyed the pizza with soft cheese, tomatoes, and basil the most. Added the fact that the toppings somewhat reminded her of the Italian flag, the flavor was named after her. However, it took a World War for the pizza to take off in America, with the return of American servicemen from Italy.

Even today, the recipe for margherita pizza has barely changed. Many places to eat in Reno like The Grill at Quail Corners still make the pizza with the same mozzarella-tomato-basil toppings that the Queen enjoyed so much. The combination of toppings expanded as the pizza went places, giving rise to the American pizza that incorporated smoked or barbecued meats. After America, the pizza went on a global tour, introducing the dish and influencing the rise of local versions.

The pizza is more or less a Cinderella story, from poor man’s meal to gourmet dining. It only took a bit of love for country to start a “flat” revolution.

(From A Slice of History: Pizza Through the Ages, Hungry History, Published July 27, 2012)