After its debut at the Smorgasburg food fair in Brooklyn Bridge Park last August 3, 2013, the Shoyu Ramen Burger is expected to become a national food craze. It may even become a best-seller in many restaurants in Reno, NV.

The burger uses fried ramen noodles as buns. These are stuffed with USDA prime beef patty, which is in turn topped with shoyu sauce, arugula, and scallions. “I cook the noodles and form the bun, and then when we put the burger together, we lightly pan fry it,” Keizo Shimamoto, its creator, told FOX News. The technique for keeping the buns together, however, is a secret that he is not keen on sharing. 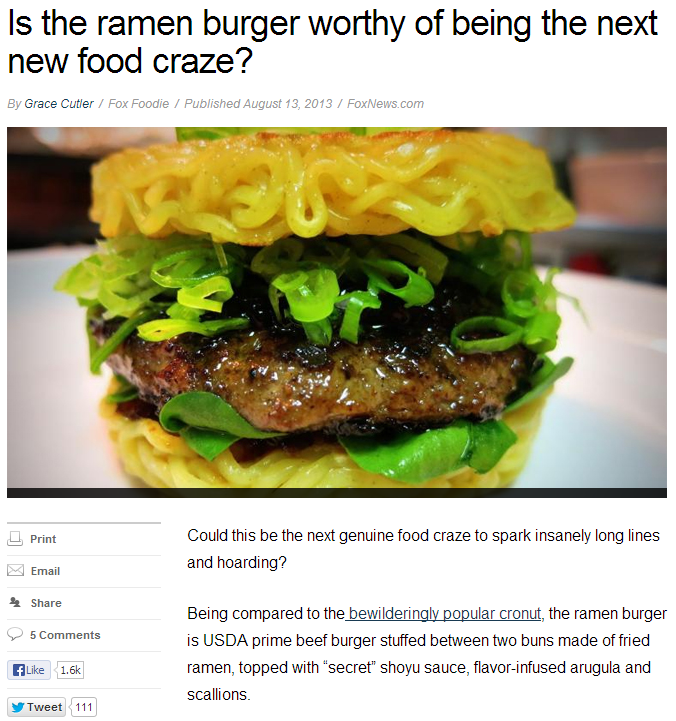 Shimamoto patterned the burger’s recipe after a traditional Japanese dish that uses pork instead of beef. “I wanted do something with beef. I grew up loving ramen, and I grew up loving burgers,” he explained. His creation might have made some burger lovers relish their favorite food even more—soon after going on sale, the ramen burger was attracting long lines of buyers paying $150 a piece. The buzz that quickly surrounded the burger was also facilitated by social media, especially Twitter, as well as food blogs.

Because of the ramen burger’s popularity, it might soon be sold across the country, especially in Reno, NV, where locals seem to have a strong love for burgers as proven by the great number of restaurants in the area that sell burgers in many variations. As a matter of fact, some local restaurants have gained nationwide popularity for making uniquely scrumptious burgers, including The Grill at Quail Corners, which is the home of a particularly delicious ½ pound Grilled Angus Burger.

However, although the ramen burger is predicted to become a national food craze, this may not happen straightaway because it is only sold on an ad hoc basis at the moment.

In the meantime, local food lovers can enjoy various other treats. The Grill at Quail Corners is a good option and is one of the best Reno restaurants! There are many eating places in Reno that do more than just sell burgers and sandwiches but also provide a wide selection of steaks, pasta, seafood, and vegetarian fare if you are looking for fine dining in Reno. While some of their offerings have become a topic of many blogs and Twitter threads, a great number of delectable treats have not yet been reviewed. Food lovers should not just rely on social media to know the latest food in town but must also travel to these places to personally try the dishes and share their discoveries.